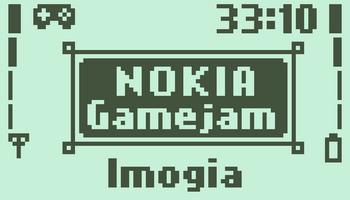 Today's progress is about the first ennemy of the game: the Jellyblob(fish). It moves up and down and disappears if the player jumps on it.

For its movement, I struggled a bit with timers at first, trying to use them to control the duration of the jump, but it ended not working as intended with the physics engine.

Then I had a revelation: just let the physcics do their thing until the objet reaches a certain point. If it's Y position is superior to a predefined variable, then the mob jumps the same way the player jumps. Gravity will then kick in, slowly it impulsion then making it fall until its Y position is greater than its threshold point, and on and on...
it's great cause it works perfectly well! o/

A short and simple 2d platformer, but with cute 1bit graphics !